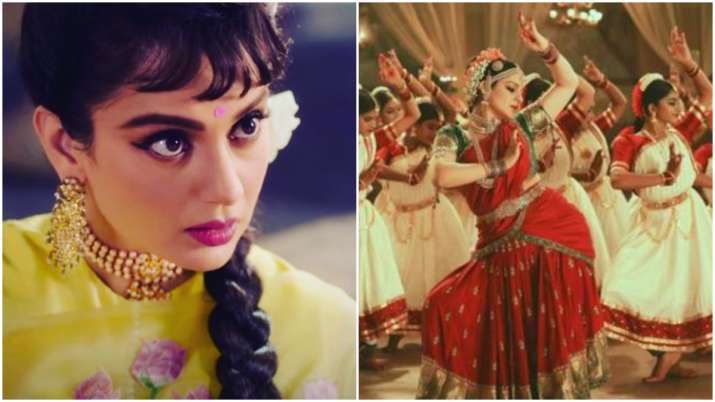 Bollywood actress Kangana Ranaut’s upcoming most awaited film Thalaivi is a biopic of former Tamil Nadu Chief Minister Jayalalithaa. The trailer of this film was well received. Jayalalithaa’s journey from films to politics is shown in this film. At the same time, another song of ‘Thalaivi’ will be released, whose trailer has been revealed. The name of this song is ‘Nain Bandhe Nain Se’. The actress has shared the teaser of the song on her Instagram.

After receiving an overwhelming response to ‘Teri Aankhen Mein’, the makers of Thalaivi are all set to reveal another aspect of Jayalalithaa’s cinematic career with the upcoming song ‘Nain Bandhe Nain Se’. Kangana Ranaut learned Bharatnatyam in just a month for the film, and brought it to the screen in the best possible way. The song takes us to an interesting turn of events in Jayalalithaa’s professional and personal life.

Talking about the experience of doing Bharatnatyam for the first time, Kangana Ranaut said, “Working every day on ‘Thalaivi’ has been a learning experience for me. This song gave me a chance to learn beautiful dance like Bharatanatyam. Jaya Maa was an unbelievable talent powerhouse, she was a great dancer and playing her character taught me a lot of new arts. Accepting new challenges has made me stronger, so I taught it to Bharatanatyam, a classical dance form. With hours of rehearsals, rehearsals and finally shooting, we have sweated our blood for ‘Nain Bandhe Nain Se’ and I am excited to present this song to the world.”

Shot over four days, ‘Nain Bandhe Nain Se’ was completed after fifteen days of set work and over a month of hard work with dance rehearsals before shooting.

Earlier, the trailer of Thalaivi has grabbed the attention of the audience by highlighting the various stages in Jayalalithaa’s life. Apart from his stardom, his struggles have been shown in the early stages of his film career. The film depicts Jayalalithaa’s journey in her political career from fighting to the rise of a great leader.

Directed by Vijay, Thalaivi, Presented by Vibri Motion Pictures, Produced by Karma Media Entertainment and Zee Studios in association with Gothic Entertainment and Sprint Films Vishnu Vardhan Induri and Shailesh R Singh & Co. by Hitesh Thakkar and Thirumal Reddy as creative producer Brinda Prasad were located in. Thalaivi is slated to release in Hindi, Tamil and Telugu in cinemas across the world by Zee Studios on September 10, 2021.