Some pictures have been shared by Kiara Advani from the sets of the film ‘Jug Jug Jio’. After these pictures, Varun Dhawan also shared a series of pictures from the same place where Kiara Advani shared her post.

After seeing Varun Dhawan’s picture, Arjun Kapoor took a jibe at him and commented that why did he copy Kiara’s pose? On the other hand, Vicky Kaushal wrote on Varun’s picture, “I am waiting to see Raj Mehta posing there too!”

Actress Kiara Advani slammed Varun Dhawan for his reaction to Arjun Kapoor’s comment. Kiara wrote, “Stop copying everything I do!” 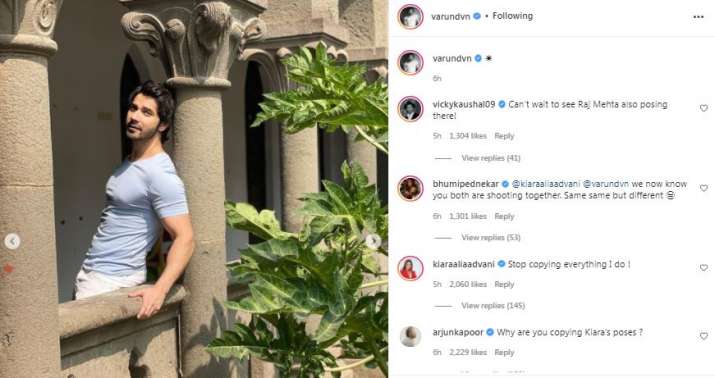 On the work front, Varun was last seen sharing screen space with Sara Ali Khan in David Dhawan’s Coolie No. Apart from this, he will soon be teaming up with ‘Andhadhun’ director Sriram Raghavan for the biopic of Param Vir Chakra recipient Arun Khetrapal. He will also be seen sharing screen space with Kriti Sanon and Abhishek Banerjee in ‘Bhediya’.

Kiara Advani was last seen opposite Sidharth Malhotra in the film Shershaah. In ‘Jug Jug Jio’, Kiara will be seen sharing screen space with Anil Kapoor and Neetu Kapoor.