New Delhi. Renowned companies make film stars their brand ambassadors for the promotion of their product. From Amitabh Bachchan to Ranveer Singh, TV or print advertisements are seen promoting products like soap, oil and shoes. Over the years, many companies have been selling their production in the name of film stars. For this, the stars also charge a hefty amount as a fee, but many times their name and picture are used at the local level without asking the stars. Veteran actor Dharmendra is furious these days on such a picture.

‘When Superstars used to do bidi ads’
Dharmendra has said that earlier he used to use his name on advertisements without asking any film star. Dharmendra has said this through social media. Dharmendra is one of the artists who are very active on social media. He uses social media to interact with his fans. Recently, a person named Prashant has shared pictures of Hema Malini and Dharmendra’s advertisement on Twitter. Posting these pictures, the person wrote in the tweet, ‘When the superstar used to do bidi ed’. 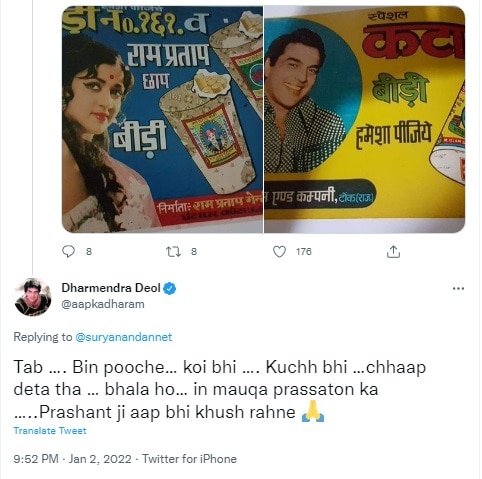 Even today advertisements are like this
Dharmendra’s fans are very much liking his answer and are also commenting on his tweet. Dharmendra is also right. You must have also seen pictures of Bollywood stars on the banners of the juice corners of the mohallas. For these also no agreement is signed and neither do the stars object to them.

Will be seen in Karan Johar’s film
Dharmendra is currently living a cool life. He still pays equal attention to fitness. He is active on social media and keeps updating something. Recently, he also reached the set of Bigg Boss, where he had a lot of fun with Salman Khan. Dharmendra will soon be directed by Karan Johar, ‘Rocky and Rani’s love story. will be seen in