Bollywood actress Kangana Ranaut shared a post on social media after the Delhi Assembly’s Peace and Harmony (Peace and Harmony) committee called her to appear on her ‘hateful’ post on December 6. The committee on Thursday (November 25) issued a notice to the “Manikarnika” actress after it received complaints against her “derogatory” and “objectionable” post in which she allegedly called farmers protesting agricultural laws as “Khalistani terrorists”. was labeled as

The 34-year-old actress who was last seen in ‘Thalaivi’ shared a new post on her Instagram story and said that she did not mention Sikhs in her previous post. The ‘Judgmental Hai Kya’ star shared a screenshot of his old post and ANI’s tweet and wrote, “Is Kejriwal’s ‘AAP’ referring to all Sikhs as Khalistanis?” 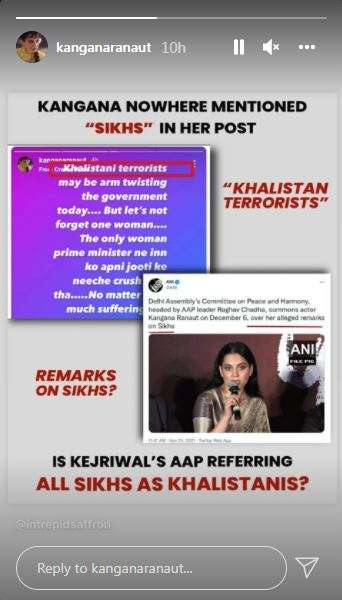 It is worth mentioning that Ranaut referred to Arvind Kejriwal and Aam Aadmi Party as the committee on Peace and Harmony of Delhi Assembly is headed by Aam Aadmi Party leader Raghav Chadha.

Actress Kangana Ranaut was summoned by the Delhi Assembly’s Peace and Harmony (Peace and Harmony) committee in connection with an alleged hate post on social media. Committee chairman Raghav Chadha gave this information on Thursday.

In a statement issued by the committee, it has been said that on the basis of complaints that Kangana’s comments on ‘Instagram’ are allegedly objectionable and derogatory, notice has been issued to the actress and she has been asked to appear on December 6. The complaints claimed that in her purported post, Kangana had referred to the Sikh community as “Khalistani terrorists”.