Actress Mouni Roy, one of the most beautiful ‘Naagin’ of Ekta Kapoor, is going to start a new innings of her life today. She will start a new chapter of her life today by tying the knot with her long time boyfriend Suraj Nambiar. The wedding rituals of Mouni have started in Goa. After pictures and videos of Mehndi and Haldi functions went viral on social media, Mouni shared a romantic picture with her future groom Raja, in which he shared her romantic picture with Sooraj Nambiar. Everything has been told.

Mouni remembers Bholenath in her heart
Sharing the picture, Mouni has written the caption – ‘Everything’ (everything). With this he has written #HariOm and Om Namah Shivaya. Along with this, he has also made an emoji of Trishul. A lot of comments are coming from her friends and fans on this picture of Mouni. Everyone is congratulating him on the new innings of life starting. 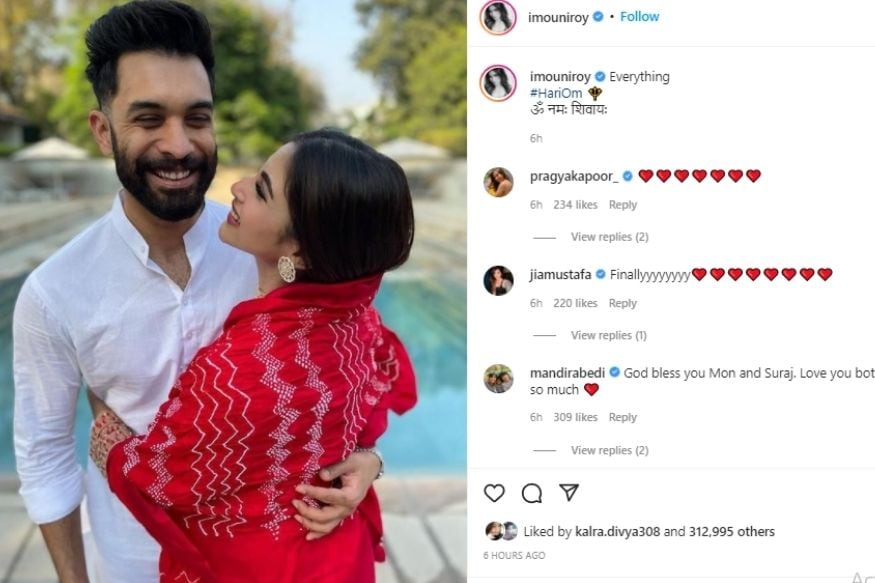 When Mouni danced with the groom
Earlier, pictures and videos of Mouni Roy’s Haldi and Mehndi went viral, in which she is dancing with her boyfriend Sooraj Nambiar. Before tying the knot of seven births, this dance video of the couple is giving relationship vibes to the fans. Looking glamorous in a yellow lehenga and backless choli, Mouni Roy is dancing with her boyfriend on the song ‘Mehndi Hai Rachne Wali’. After doing a little dance, Sooraj stands on the side but Mouni’s dance continues.

First meeting took place in Dubai
Let us tell you that Mouni Roy and Sooraj Nambiar first met in Dubai, after which both started dating. Both of them never confirmed their relationship but both were often seen together at parties.