‘Bigg Boss 15’The finale of (Bigg Boss 15) is near. Rakhi Sawant is out of the house even before the finale of the show. Rakhi Sawant has herself confirmed this. Due to this the fans of the actress have been disappointed. In the upcoming episode of the show, you will see that some people will enter the show. Then a decision will be taken to eliminate one of the contestants from the house.

According to media reports, during a task, all the contestants will be seen entertaining the audience. As per the rules, the contestant to whom the audience will give the lowest number, will not be able to make it to the top-6 contestants and will be out of the show. Although Rakhi Sawant’s eviction has not been seen from ‘Bigg Boss 15’, Rakhi Sawant has confirmed this.

Rakhi Sawant posted on Instagram
Rakhi Sawant has spoken about being out of ‘Bigg Boss 15’ from her Instagram account. Sharing a photo of herself, she wrote, ‘I am out.’ He has also shared a laughing emoji with the caption. All the fans of the actress have expressed their disappointment over her elimination by commenting. 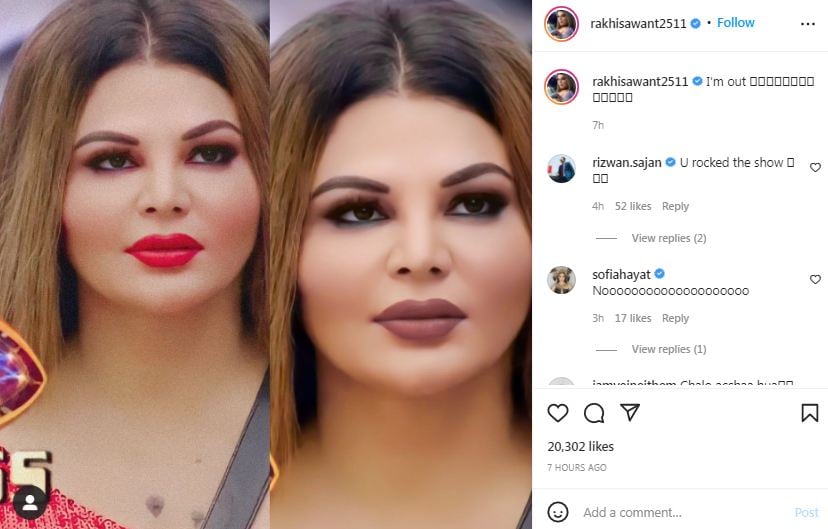 Rakhi Sawant was kicked out of ‘Bigg Boss 15’ by the audience. (Instagram/rakhisavant2511)

Rakhi’s fans were surprised
Surprisingly for Rakhi’s fans, the task in which Rakhi has mastered, she lost in the same task. People call her a drama queen because of her ability to entertain. Rakhi Sawant was confident that she would win the ‘Bigg Boss’ trophy this time, but it could not happen.